ERVs to the School HVAC Rescue! 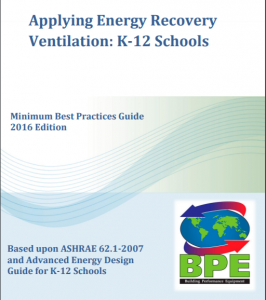 In an earlier article, we discussed how schools can take advantage of the American Rescue Plan to retrofit and green up their HVAC systems. (Can the American Rescue Plan Help Public Schools Make the Grade?) As we’ve pointed out, the best way to achieve healthy Indoor Air Quality and reduce district energy budgets is to implement ERVs at the heart of clean energy HVAC systems. So, we figured we’d share our Minimum Best Practices Guide for Applying Energy Recovery Ventilation in K-12 Schools.

Some key points for installing ERV units in a school environment.

According to ASHRAE Standard 62.1, each classroom should have the capacity to supply, at minimum, 13 cfm per person occupying the room, and for younger students (ages 5-8), 15 cfm per person. This, of course, can be difficult when dealing with older buildings. However, regardless of building age, all schools should comply with the up-to-date building codes and standards for an optimal learning environment.

Minimum Ventilation rates should always be the sum of each zone’s requirements. With respect to a classroom application, typically one zone will exist. Other zones will exist within the building, such as locker rooms, offices, auditoriums, and hallways.

To determine minimum ventilation rates and unit size. (Details in the above guide):

(2) Calculate the Zone Outdoor Airflow – the outdoor airflow that must be provided to the zone by the supply air distribution system. Voz = Vbz / Ez

(3) Depending on the type of system, calculate Outdoor Air Intake Flow and verify that the systems dedicated to those zones comply. For example, for Single Zone Systems (Recommended for Classrooms) use Vot = Voz.

An ERV running with parallel airflow is only 50% as effective as a unit running counterflow. (See below.)

Larger ERV units can be used for several different areas, improving overall efficiency. The image below illustrates the proper design of a BPE-XE-MIR-500 serving two classrooms with a possible dividing wall. In order to provide displacement air ventilation, air is taken and provided at two extremes allowing for unidirectional flow of fresh air. 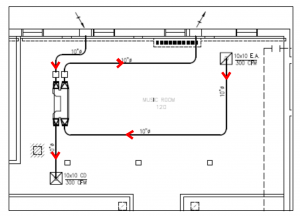 The figure below demonstrates good separation, in excess of 15 to 20 feet, between the airflows. A ten-foot minimum is recommended between the fresh air and exhaust. The air being brought in is coming through the top of the BPE unit as shown above and taken to the back left corner of the classroom. The air being exhausted out of this area is in the farthest corner from the fresh air intake which is in the bottom right corner. This provides very good separation between the intake and the exhaust and allows for good displacement ventilation.

Independent ASHRAE peer-reviewed publications hold the general consensus that displacement ventilation can be up to two and a half times efficient as opposed to dilution practices, which typically occurs when supply and return grilles/diffusers are not separated evenly or at recommended distances. 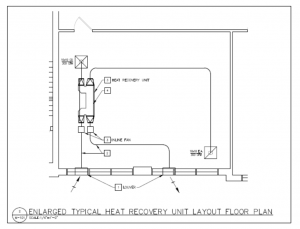 The image below reveals a prime example of What Not To Do with BPE Ventilator Modules. There are two main problems. First, there is poor separation between the intake and the exhaust. The air is basically being pulled from the front left corner while fresh air is pushed into the front right corner of this classroom. This configuration will have a tendency to pull air through the front of the classroom where the teacher sits, but the students in the back will not receive the benefit of fresh air. Our recommendation would be to move the supply air on the bottom right of this drawing to the back of the classroom (as is shown by the red dotted lines).

Second, the BPE Ventilator Module is not in a counter-flow operation – it is concurrent flow. Concurrent flow or parallel flow as it is also referred to, will have a tendency to provide 50% thermal effectiveness whereas counter-flow technology has a tendency to be up to 99% thermally efficient. Changing this flow path is relatively easy to do – simply reverse one flow path. If the BPE unit is placed between the intake and the exhaust in the proper location as shown previously, it is easy to avoid this problem. This is probably the most common install mistake that occurs. 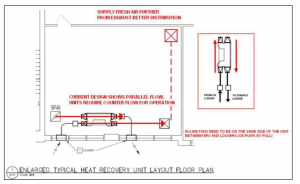 For use in conditions below -10F and/or above 40% relative humidity we recommend the ductwork is sealed and sloped towards the ERV, the ERV should be sloped as well. The slope should be uniform and must not be less than one-eighth unit vertical in 12 units horizontal (1- percent slope) or to local building code, whichever is more stringent. A drain is recommended to be installed in the ductwork in humid conditions.

ERV units that make the grade.

As evident by how long many school buildings try to make do in less-than-ideal circumstances, districts really can’t afford to make poor choices when retrofitting infrastructure, including HVAC. In many cases, the money simply isn’t in the budget for regular upgrades. So, it only makes sense to allocate American Rescue Plan funds toward retrofitting ancient HVAC systems in schools. The results not only create an enhanced, healthy learning environment but the money saved on energy can be spent on more salaries or programs.

To design HVAC right, don’t compromise on mechanical ventilation. BPE, Inc.’s reliable, maintenance-free equipment runs up to 90% thermally efficient with no cross-contamination of air streams. Thanks to BPE Regenerative Condensate Return® Technology, BPE ERVs run 34% latent in areas with high humidity. And where the industry standard for Energy Efficiency Rating is 10, BPE ERVs boast EERs of 36 to 160.

For complicated multi-zone or demanding cleanroom applications, we provide computer modeling capable of taking into account 10-year weather bin value data, specific construction, envelope, process loads, and other miscellaneous building loads. This provides projections of future performance for different systems before they are built and commissioned.

Schools such as Hunterdon Regional High School, NJ, and Hopewell Valley Regional District, NJ have enjoyed clean energy HVAC systems using BPE units and expertise. Not only are the folks at BPE ready and willing to help your school district become healthier, save money, and cope with the extra challenges posed by Covid, but we’re excited about it. This is our passion. So give us a call, and let’s chat about the best way to prepare school buildings for the future.