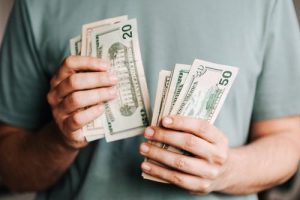 beneficial to the planet and the bank account. Fewer people understand that this principle can reduce the planet-snuffing emissions coming from the world’s building stock. Frankly, some folks don’t care. But how about reusing energy already tempered by HVAC to save money on energy bills? That’s a concept we can all get behind, and it’s a simple one.

Sustainable HVAC (Heating, Ventilation, and Air Conditioning) functions by reusing, but not recirculating, stale indoor air on its way out of a building. Before waving goodbye to discarded air molecules, we can transfer their heat energy to warm a space to room temperature in colder months and cool it down during warmer weather. Simply pass outgoing and incoming air through a high-efficiency energy recovery ventilator or ERV.

When it comes to the BPE line of energy recovery ventilators, we’re talking about recovering 70% to 98% of the thermal energy that would otherwise be sent out of the building with the exhaust—and slashing energy bills in the process. Let’s look at how ERVs keep more of the ‘green stuff’ in your bank account while creating a greener building stock.

The amount of heating or cooling a building requires is called its load. The better an ERV preconditions outside air, the less a load gets handled by HVAC equipment such as air conditioners and heating systems. Processing a reduced load allows for smaller, less powerful HVAC components. Not only are such elements less expensive to purchase for new construction or retrofits, but they incur less maintenance and fewer replacement parts.

What does an energy recovery unit cost in the end?

Worried about the sustainable HVAC’s price point? ERVs pretty much pay for themselves. First, the less-expensive and longer-lasting HVAC components can offset the cost of your purchase. After the fact, reduced energy bills will pay for the rest of your ERV investment.

Many ERV brands claim a payback period on units of within three years tops. (In our experience, BPE ERV customers typically enjoy that payback within two years thanks to the product line’s extra high thermal efficiency.) Geographic location and the size of the system play roles in how fast that payback is realized.

Finally, for the rest of the unit’s life (approximately 20 years), customers enjoy a positive cash flow thanks to those lowered bills. 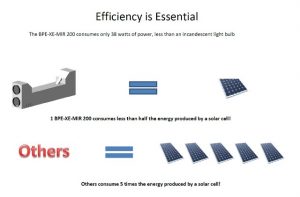 The average small AC unit uses 500 watts of electricity while the BPE-XE-MIR-200i uses a mere 38 watts. The blower fans in traditional HVAC systems will always require more energy than the high-efficiency inline fans used by BPE’s ERV units. However, if you’re looking to add balanced mechanical ventilation to your building or home, you might as well do your research to find the most efficient unit for your space.

It’s important to gauge how well an ERV adjusts and maintains comfortable indoor temperatures by knowing the unit’s efficiency rate of heat transfer. In many ERVs, this rate varies between 45% to 65% efficiency. BPE’s patented technology, used to create their true, direct counterflow, fixed-plate ERVs, have boasted rates as high as 70% to 98%.

A unit’s Energy Efficiency Ratio (EER) is another consideration. This number is derived by dividing BTUs by the electrical watts used to generate airflow. The higher the EER, the better!  (BPE units typically rate between 36 and 160 EER, while the HVAC industry averages 10 EER.)

ERVs can make the most of Demand Control Ventilation (DCV)

To further lessen energy consumption, use an ERV’s variable speed controls to reduce fan velocity overnight and other times when building occupancy is low. However, beware the temptation to shut the unit off. A quality ERV is designed to work continuously. When you shut it off in an empty building, you compromise ventilation balance and allow stale air and pollutants to proliferate. Worse, a downgrade of thermal comfort and invigorating clean air may tempt building management to overcompensate on fan speed after the fact. Such a practice sacrifices balanced ventilation further. A high-performance unit complete with quality variable-speed controls can fine tune energy savings.

Want to save money by introducing renewable energy into your home or commercial building? At Building Performance Equipment, Inc., this is what we facilitate with the smallest to the largest spaces to come across our drawing boards. No design is too simple or too complex. When you are ready to save money, breathe better, and feel better in the spaces you spend the most time, give us a call at 201.722.1414.