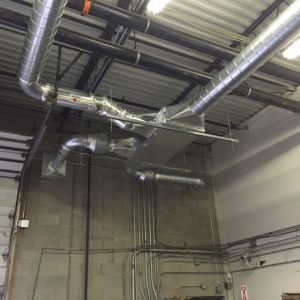 At BPE, you could say FanTech made us ‘big fans’ of its FKD series of centrifugal fans. In particular, we use FKD-14 models often; they are high quality, 100% speed controllable, single-phase, and 120 VAC with 4.8 amps draw. These fans work superbly alongside our Energy Recovery Ventilators, but consumers sometimes have questions about the set-up when placing them and their speed controllers in line with our units. So, let’s make life a little simpler with some tips:

FanTech fans can be suspended or mounted horizontally, vertically, and at other angles using neoprene or spring hanging or base isolators or angle brackets and vibration isolators.

Speed controllers are simple to install, but it helps to begin with a diagram. Place controller—in this case, sized to 5 amps–inline on the hot leg (the wire that brings current from the electrical panel to feed outlets and switches.) This will power the fans and the ground. In the picture below, the brown wire is hot, white or grey wires are neutral, and green is the ground. Such is the way the FKD-14 wiring should look.

Powering up and adjusting minimum airflow on the fan. 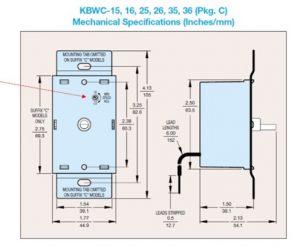 After powering up, there is a setting on the speed controller that must be set for minimal airflow when the fan is on. (See KBWC controller series diagram right.) The trick is to set the minimum flow with the micro pot adjustment (see arrow) before the cover plate is installed. You’ll need a small flathead screwdriver. Note: Once the cover plate is on, you cannot access the minimum flow micro pot.

The reasoning behind this: If the fan has enough power to heat up, but not enough to flow air, the fan motor can become damaged. It has overheating protection but can still get cooked. BPE recommends adjusting the flow until you feel air movement and then give it a little more airflow (about 200 cfm or more on a FKD-14).

Pro Tip: From over 20 years of experience, we’ve found it’s important for contractors to move the exhaust fans before the BPE ERV heat exchanger if the air is very humid in cold weather. Examples of such indoor spaces that get wet in cold weather include hot tubs, hot yoga studios, pools, wash-down areas, and closed-cycle beer breweries. Before the heat exchanger, the moist air is in a gas phase. Such air is well tolerated by the in-line fan and its blades. However, when cold or freezing air comes after the heat exchanger, water and possibly frozen particles can hit and damage the fan blades. Even at -40°C or F, using this tip will produce better results. Bonus: As the air is pushed into the unit’s core, the BPE heat exchanger becomes a sound dampener for the fan and helps it run more efficiently.

As always, if you have further questions, don’t hesitate to give us a call! We pride ourselves in offering simple and unique solutions for thermal comfort and healthy indoor air quality!